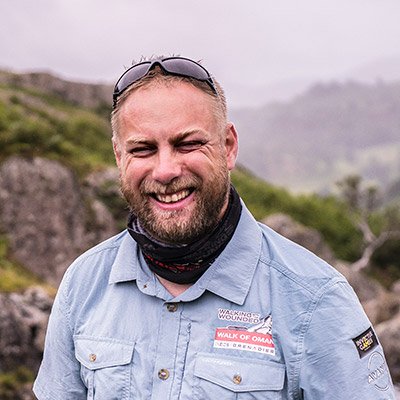 In just 7 months’ time, we will be taking a team of 6 serving and ex-military servicemen out to Oman to embark on the trip of a lifetime as they trek 400km on foot across the Omani desert.

In this series, we’re introducing you to the WWTW team.

Ashley joined the team in July but has since stepped back due to injury and become a member of the support team.

Ashley served as a Challenger 2 Tank Crewman serving in Kosovo and Iraq. He was diagnosed with Keratoconus 10 years ago, a degenerative eye disease and has since undertaken various physical challenges to inspire others.

Why did you sign up to take part in the WWTW Oman expedition?

Since being diagnosed with Keratoconus I have taken it upon myself to try and inspire others, testing my eyesight to the max. I have faced the cold whilst on an arctic expedition and have been looking to do something similar in the desert. I feel that if I can prove that I can manage in these extreme circumstances then an individual who has been diagnosed can see that you should never set limits for yourself.

Why did you sign up to serve in the Royal Armoured Corps (RAC)?

I have always had a very keen interest in cars, so when I turned up to the careers office to follow in my father’s footsteps and join the Parachute Regiment, the recruiter saw through it, or maybe this was due to him being a RAC soldier himself, either way I am very proud of my time in the Cavalry (the Queen’s Royal Hussars) and wouldn’t have changed a thing.

In short, very difficult. My final few years in the forces were behind a desk working 9-5 as a recruiter, I thought I was very well prepared, however I found things very difficult, trying to settle into a role that suited me caused issues, but with perseverance and the right role things soon improved.

How will you use the skills you learnt in the armed forces during the Walk of Oman expedition?

The main skill would be teamwork, having served for 14 years not a day goes by without having that team beside you.

In the armed forces, we lived by a set of rules called ‘Values and Standards’. You take these with you wherever you go and whatever job you transition into. From selfless commitment to integrity, these are important values to live by. I’ve lived with these rules for so long that they’re deeply ingrained in me.

What challenges do you think you will face?

I’ve never been to Oman, so I’m excited to explore a new country and gain a unique vantage point from the desert. That said, I have a realistic outlook on the challenge. I want to know how it will feel trekking in a new terrain, how this affect me mentally, and how my eyes will be impacted.

How are you training for the challenges?

I like to keep myself fit but like a lot of us we are not as fit as we were. Last year I have become a Guinness world record holder as the fastest mile run (blindfolded)!


In 3 words, describe where you were 3 years ago