The Importance of service 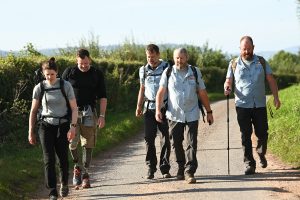 “I served with the Queen’s Royal Hussars for 14 years, I am incredibly proud of serving my country during my time on operations and back in the UK following in my dad and grandads’ footsteps.”

The Grenadier Walk of Oman expedition team have all served or they are currently serving in the Armed Forces. When they joined the British Armed Forces, they signed up to a life of Service, serving both their Country and their fellow Armed Forces Personnel and ultimately, putting their personal freedoms behind serving their Nation.

These values and standards are at the hearts and minds of those who have served and are still serving. Regardless of their role within the Armed Forces, they have been taught to put the needs of others above their own. However, a life of Service can take its toll on both mental and physical health. But this does not mean that those who served are unable to seek help and support when they need it.

The Grenadier Walk of Oman team all know this too well, having all suffered physical or mental wounds from their careers in the Armed Forces. Over the years, many have sought support from the Armed Forces, National Health Service (NHS) and third sector organisations like Walking With The Wounded. For example, expedition team members, Dave, Sean, and Brian have all received support through WWTW’s mental health, care coordination and employment programmes. Now, each of them gives back to the Armed Forces community. Dave has set up an Armed Forces Network at Marsh and Sean is working with the Hereford Veterans Support Centre. Furthermore, Ash Winter, who was originally part of the expedition team, but who had to step back to the support team due to injury, is working as a Welfare Officer for Defence Medical Welfare Service (DMW) in Herefordshire, supporting the Armed Forces Community who are unwell.

All of them continue to serve their communities in some way.

We asked the team what the importance of Service means to them.

“I served with the Queen’s Royal Hussars for 14 years, I am incredibly proud of serving my country during my time on operations and back in the UK following in my dad and grandads’ footsteps. Moving into DMWS and WWTW gives me that opportunity to continue serving those I have served with ensuring the best transition possible day to day on this walk.”

Chris Carlisle, WWTW Employment Advisor for the West Midlands and ex-Royal Welch Fusiliers, joined The Grenadier Team today to see them off from Hereford Cathedral. He said,

“My service means everything to me. It made me who I am today. I joined up as a 17-year-old from a tiny village. I grew massively in the first few years in the army. Not just physically but also mentally. I was injured early on, but I managed to stay in and do my 22 years which I’m proud of.

Now I feel I’m continuing my service because I’m working with veterans, assisting people who are like I was in 2010 after leaving the Army when I was homeless and suffering from PTSD, depression and anxiety which is a horrible illness. If I’d have been homeless and not served, I don’t know how I would have coped. This job now gives me a reason to get up in the morning. I still struggle now but talking with and helping others helps me too. And if it all gets too much I know WWTW is there for me and a few therapy sessions get me back on track.”

What does Service mean to you?